Is it possible that dead people can communicate with us? Bob and Julie moved to Phoenix nearly two years prior. Bob was running a roofing crew and Julie was raising their daughter, Charity. Charity was the product of a prior relationship of Julie’s, another friend I’d grown up with in Alexandria.

I knew Charity’s father initially from church. He was a couple years younger, but nearly a foot taller than me by the time we matured. His name was Steve. He had died just a couple weeks before, the result of a broken neck from a motorcycle accident. He was on his way home from a party in Muncie, Indiana.

Bob and Julie had lived a mile away across the field to the north of our ‘haunted’ home in the country. I knew Bob from high school, although he was not a student at the time. He graduated nearly a decade ahead of me. Most of my friends were older for some reason. My wife got to know them through me when we first moved to the country.

Charity was five now and quite the cutie. We had all learned of Steve’s recent passing, but it was not a subject of conversation other than to acknowledge it had happened. Instead, since death was on the agenda, Bob related a story about an old friend of his that had died of a brain tumor.

Steve (happened to have the same name) and Bob grew up together, graduated and even worked together for a few years. Steve was diagnosed with an inoperable brain tumor after showing some strange behaviors and loss of motor skills.

It advanced rapidly, but the two of them remained close and Bob spent a lot of time with Steve before he passed. During that time, they had made a pact that Steve would return somehow to let Bob know what the ‘other side’ was like. Bob had no idea how it was going to happen, so when it did he nearly lost it.

Bob and Julie were renting Steve’s parents house in the country, a two-story as well. Steve’s parents had several children and had farmed the land until they were no longer able to meet the physical demands, so they moved into town and rented the farmland to the folks who owned our property. It had been a few years since Steve’s death when Bob and Julie moved in.

They had their bedroom set up in Steve’s old room downstairs since it was bigger than his parents’ original bedroom. It was an old wood-framed house that was in considerably worse condition than our freshly remodeled house.

Bob, Julie and Charity were all fast asleep one night when Bob had a dream that literally put him into another world for a moment. Steve showed up in his dream and after talking with Bob for several moments, Bob realized he was dreaming and said to Steve, “Hey, wait a minute. You are not supposed to be here.  You’re dead.” Steve replies, “I just got tired of listening to the crickets.”

At that point Bob awoke from the dream and sat straight up in bed a little spooked. He looked around the room and was even more startled as it appeared as Steve’s room once looked. As the vision subsided he woke Julie and told her what happened. They got dressed, picked up Charity from her bed, drove into town and went to Bob’s parents’ home.

I certainly would not have responded that way, but everyone is different. He had never had any ‘weird’ stuff happen to him his entire life, even if he had made the pact with Steve. Bob and I hadn’t really spent much time together since I went off to college, so this gave us a chance to share a bit more of our lives. I finally found a place to talk about some things that I felt needed to be brought out on the table.

I synopsized the story about David, Grandma and what led up to my wife’s experience with the drums and Mrs. Watson. Apparently Steve had passed around the time Krystal was born. It was only a few weeks after his death when Bob had the dream. They moved to Phoenix shortly thereafter.

Now Bob knew Charity’s dad, too, but he and Julie really didn’t talk about him too much, so we didn’t 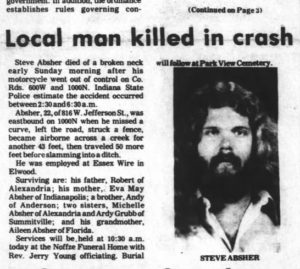 belabor the discussion of his accident other than to clear up the details of how it happened. Steve was returning from a party in Muncie and was riding his bike down a country road that would drop him off in the middle of Alexandria, only a few blocks from where he lived.

He was kind of a thrill seeker and rode his Kawasaki 1000 like a race bike at times. He missed a corner just before a bridge, catapulting his bike across the creek and broke his neck when he hit the other side. A passing motorist saw him the next morning and called the police. According to the reports from our local paper and relatives, he died instantly.

Charity really took to Krystal, watching over her the entire evening while keeping tabs on the adults from time to time. The temperature had hit 100 degrees for the high the first day we arrived and by now it was rare that the high was below 110˚, so we spent most of the evening inside. By 11 o’clock the girls were both ready for bed, Krystal asleep in Charity’s arms already.

By midnight they were both asleep and shortly afterward we said goodnight to them. My wife was ready for sleep, but my mind was racing from an idea that came while we were having dinner. I wondered if I could contact Steve (my friend) directly somehow, like I used to talk with Gary in school.

I just meditated for a while, hoping my wife would drop off to sleep and I could try to talk to Steve without ‘interrupting’ her sleep. Sometime later I decided to move forward with my experiment. I prayed, “Jesus, if it be your will, your will be done. Can I talk to Steve?” With that I began to telepathically call out to Steve. “Steve…Steve… are you out there? Can you hear me?”

After a few times I called out louder in my head, like I was yelling, “Steve… Steve… Are you out there, man? CAN YOU HEAR ME?” Nothing…  Then it occurred to me – Steve is a common name, silly, and I’m not using his last name, either. What about his nick name? “HEY BLAB! ARE YOU OUT THERE? CAN YOU HEAR ME?”

“Bruce, is that you?” I heard his voice just as plain as day. At the same moment his face appeared in the center of my mind’s eye. That was cool, but nothing like what was about to happen. My wife raised up off her pillow and exclaimed, “I just saw Steve’s face and I tried blinking my eyes… he wouldn’t go away! What are you doing!?”

I hadn’t said a word and had been perfectly still in bed so as not to disturb her. I told her what I was trying to do and that at the same instant he appeared to me, she raised up off her pillow. At that point all I could do was cry in joy of the connection. There was more, though, and it all made perfect sense.

I said, “I heard it has been medically proven that the body loses 4 to 6 ounces of weight immediately upon cessation of life. Weight has mass. Mass has form. I wonder if we can see him with our eyes open?”

She replied, “I don’t know. It scares me. You do whatever you want. I’m going back to bed.” Well, at least she didn’t freak out and keep me from going further. I couldn’t understand how ‘going back to bed’ would solve her concerns. Anyway..

I lay back down and kept my eyes open now. I asked, “Blab, can I see you?” A mist formed in the darkness at the foot of the bed. As I watched, his body came into focus and he looked normal, complete with his favorite flannel shirt and jeans. His hair had been past his shoulders for years. Seeing him there now all I could say was, “Far f..n’ out!” in my head. This was still just telepathic communication, nothing out loud.

“Tell me, can you travel with a thought?” Immediately I saw what looked like ‘trails’ going out of the room and immediately returning, starting and stopping with his full body visible in front of me. Again, “Far f..n’ out, man!” It was all I could think of to say. Then I got real critical because it helped me focus.

“Are you really there or am I imagining this? I know how powerful my mind can be and I could be projecting you there.” At that instant I felt the sheet moving across my feet and the bed moved slightly. I looked closer and it appeared he had his foot on the end of the bed between my feet. He had his left hand on his knee, elbow in his hand and chin in his other hand, smiling at me like a Cheshire cat. “How’s that?”

My energy went through the roof at that point. I could barely lie still so I took a few deep breaths and tried to relax. I was in bed and really didn’t want to get up, but I couldn’t calm down. My mind was racing as I continued talking with him. I had to get up.

I felt like a kid about ready to go over the top of a roller coaster. I got up and put some clothes on, walked ¾ of a mile to a pancake house and bought a pack of smokes, talking with Steve the whole way. It was about 2 a.m. at that point.

I walked back and decided to walk around the park next to the apartments as we continued. Most of our talk was about old stuff, Charity and his regrets. I told him about my experiences and evidently, along with my original question of being able to travel with a thought, he felt more at ease in his new environment. He was kinda freaked out too when we first began.

We finished our conversations and I returned to bed, still excited but quite exhausted from the early morning ordeal. I fell asleep quickly. My wife didn’t want to talk a lot about it in the morning, bothered by the confrontation of her fears I can only assume.

I guess she must’ve had some deep seated old ‘Christian’ views of necromancy, talking to dead people, and it really affected her outlook on such things. I’d read that doing such things was a taboo and seriously frowned upon by the ‘church.’ I found some conflict with my own experience, especially since I had asked permission.

We never did reach reconciliation on my spiritual discoveries, explorations and theories. I felt so alone in that place and simply could not understand why those things were so frightening to her. There was obviously nothing harmful in the act of communication. Later I would question the very core of the religious systems that limit human experience in the exploration of communication and consciousness.