Don’t Try This at Home

Some people might not be so open with their past. Hey, I figure the universe has no secrets and if you wanted to investigate deep enough, the information is out there. I’m not particularly proud of my choices, but I’m alive and still an eduholic.

Beside the facts, somewhere I might save someone great pain and suffering by sharing this. At any rate, I’d been contemplating a way to get back to the Light I had experienced the year before. Even though I was not on any ‘drugs’ at that time it happened.

I was dating an English professor’s daughter at the time and we had experienced a few trips together already. I’d met her shortly after my initial experience with telepathy in college. We’d met on the campus bus earlier that year, my second year there. I’d change my major from Pre-Med to Psychology with a Religion minor. It seemed more fitting with the self-inquiry I was experiencing.

Betsy and I had many paranormal events to date, moment of sublime interactions with an ever-so-soft and permeable reality. One night after we had ingested some massive amounts of LSD I wanted to play for her while waiting for the effects to launch. I put on Led Zeppelin II and cued it up to Moby Dick, John Bonham’s solo, which he started by playing with his hands.

I played through the solo, starting with my hands, and by the time the tune was over I had sticks in hand 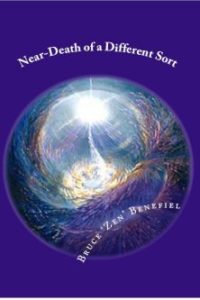 and was a bit sweaty from the workout. I flipped the album over and started playing along with Whole Lotta Love. After a few moments I looked over at Betsy and as our eyes met something miraculous happened. Everything beyond the perimeter of the cymbals and drums went ‘white.’ I continued playing.

I could still see the drums, my body, and the floor beneath me as I continued to play. Somehow I knew it was okay because I could feel no physical disturbance and could think as I continued playing, although I wasn’t thinking much as I played. So I just continued along with the album. Within a few moments, my sight returned to normal and the rest of the room came back into view as I played through the end of the tune.

Betsy had a really weird look on her face that looked like a cross between complete awe and intense fear. I asked her what was up and she asked me where I had gone. Evidently I had disappeared for a few moments into this white light after our eyes had met and it really freaked her out. I could understand why. How could that be, though?

I told her I had no idea where I had gone, but that I could still see the drums, cymbals, my body and the floor from my perspective, although I was surrounded by the white light, too. I’m not sure what it proved, if anything. All I know is that I had the same feeling of being ‘home’ in the light that I’d experienced the year before after being asked if I was willing to die for what I believe in…and doing so.

I had returned somehow, however surreptitiously, but I was there. It was a place of freedom, no fears of any kind, totally blissful and serene. I would not recommend this procedure to anyone, however. Do not try this at home. There are no trained professionals.

Of course I didn’t tell my parents that I had used half of my room and board money for school to pay for drums. I didn’t even tell them I had them. I didn’t think about what I would do about my room and board situation when Christmas break came. I had a car, so I could find a house off campus. But where and how? This meant that I had to move out of the dorm over winter break without their knowledge, too.