Ufologists’ questions permeate a surreal environment. Perusal of social platforms and various groups seem to offer evidence of further division in the field, with obvious questions about the involvement of non-human intelligence in the current transcendent event. Many seem to think our naturally-distanced cosmic cohorts are directly involved. Others stand firm in their convictions that humans are solely responsible for their actions and the conditions simply presenting the consequences of prolonged behavior.

This one can speak only to his experience and the references that have been left  by those who’ve explored before, perhaps even been here before so long ago. Contrary to many who believe the UFO phenomena is incomprehensible and dangerously like the behavior of humans toward each other; the vile and decrepit acts of control and dominance of people and resources at any cost and by any means, advanced beings have an equally advanced consciousness.

Religions have tried to promote an understanding of the nature of God and creation that became misconstrued over time and certainly unhealthy in its separative qualities. Many ancient texts included descriptions and stories of beings and vehicles that most certainly allude the presence of advanced races as well as ‘contact’ with some.

Looking for a piece of text that encapsulates the understanding life-long contact has inspired and permitted, one source stood out in answer to another of the ufologists’ questions. It is replete with conveyed awareness. is a term and only a term to express an incomprehensible concept to humans. There is a ‘supreme’ consciousness that all advanced or enlightened races embrace as a guiding force and frequency to aspire toward. Their actions demonstrate it across the gamut of experiencer-accounts.

The enlightened worlds all recognize and worship the Universal Father, the eternal maker and infinite upholder o f all creation. The will creatures of universe upon universe have embarked upon the long, long Paradise journey, the fascinating struggle of the eternal adventure of attaining God the Father. The transcendent good of the children of time is to find the eternal God, to comprehend the divine nature, to recognize the Universal Father , God-knowing creatures as they are in their spheres, like him as his is in his Paradise perfection of personality and in his universal sphere of righteous supremacy. From the Universal Father who inhabits eternity there has gone forth the supreme mandate, “Be You perfect, eve as I am perfect.” In love and mercy the messengers of Paradise have carried this divine exhortations down through the ages and out through the universes, even to such lowly animal-origin creatures as the human races of Earth.

This magnificent and universal injunction to strive for the attainment of the perfection of divinity in the first duty, and should be the highest ambition, of all the struggling creature creation of the God of perfection. This possibility of attainment of divine perfection is the final and certain destiny of all man’s eternal spiritual progress.

Earth mortals can hardly hope to be perfect in the infinite sense, but it is entirely possible for human beings, starting out as they do on this planet, to attain the supernal and divine goal which the infinite God has set for mortal man; and when they do achieve the destiny, they will, in all that pertains to self-realization and mind attainment, be just as replete in their sphere of divine perfection as God himself is in the sphere of infinity and eternity. Such perfection may not be universal in the material sense, unlimited in intellectual grasp, or final in spiritual experience, but it is final and complete in all finite aspects of divinity of will, perfection of personality motivation, and God-consciousness.

This is the true meaning of the divine command, “Be ye perfect, even as I am perfect, ” which ever urges mortal man onward and beckons him inward in that long and fascinating struggle for the attainment of higher and higher levels of spiritual values and true universe meanings. This sublime search for the God of universes is the supreme adventure of the inhabitants of all the world of time and space.

Now this may be hard to comprehend; that advanced races all have this understanding that is, to date, incomprehensible to man in any ubiquitous sense. In fact, it is one of the prerequisites to advance toward a Type I civilization; a comprehension of at least some universal laws and principles built in to the natural order of things and specifically to our evolution. It’s in our genes, literally. If we step back and look at the essence of the messages received through various channels and/or ‘sources’ we find to be true. 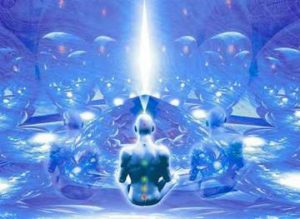 Another potential answer to ufologists’ questions goes deeper. Frequency-response, the ability of the mind to reflect the individuated source code, is the central component of communication with advanced races. As in the above, the individuated sphere reflects the supreme sphere; that indwelling aspect of God that is replete within the individual learns how to reflect the divine perfection in the outer world. There are experiential examples strewn across the Net from those who’ve ‘raised’ their consciousness or vibration and chose to share their story. Creation is interactive to the extreme, we just haven’t accepted that it also reflects our unconscious activity as well, as in the transcendent event we are facing now.

From another perspective, to make it a bit more understandable, an NDE story often includes a view of the Light and sometimes even entering it… absorbed completely yet still individuated in the ability to think and respond. Extrapolate that to the notion of the Light condensing into form and residing as a point within individual beings, each body on Earth. Each of us, without exception, is connected to Source. We have the choice whether to activate that connection or not. How we connect, our ability to completely and totally ‘let go’ of human beliefs and acquire higher-ordered knowledge, is up to us.

We have that choice in all activity, from health care systems to technology development to planetary administration and distribution systems to meet the needs for individual care and survival, even more toward the awareness of each thread in the tapestry of Earth-human relations. Everyone has a spot on the team, there are no cuts from the roster. In other words, the activity of universal consciousness with humans is replete in the non-human intelligence that is attempting to guide us through our transition.

We’re on a cosmic time-table, to answer at least one of the ufologists’ questions. The Earth itself is changing; for example, poles shifting. That is a very basic awareness we all have now. What else is happening simultaneously? We’re moving from one epoch to another, from Piscean to Aquarian ages. Wouldn’t this also be accompanied by major shifts in consciousness and human activity? The old patterns and programs of ego-centric and fear-laden belief systems are being uprooted. Chaos in world affairs is evidence now. Many have been anticipating this process, not knowing exactly how it would happen, only that it, indeed, would happen.

How we proceed is a matter of acknowledging this internal communication and connection that exists with a higher-nature of humanity; a move toward oneness. This move does not take away personal choices or individual rights, it simply invites them to be more focused and purposeful. The activity of non-human intelligence is in support of this behavioral change within the consciousness of humanity, individually and collectively, toward our next step in universe affairs; the acts of aligning attention, intention and action with universal understanding that enables us to work collaboratively toward harmony among people and planet. 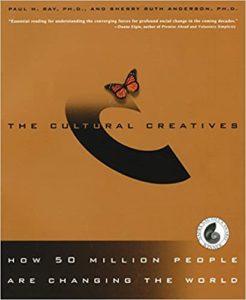 Everyone, even those we believe to be evil power-hungry controllers, has a role in this next act of humanity’s play. It is essential, imperative, that aberrant emotional responses are minimized or mitigated. This allows the awareness of observation and conscious-choice action to evolve. The result empowers the engagement of individual activity and support of non-human intelligence toward the gradual shift in planetary systems toward a higher order of service to humanity.

Cultural Creatives, or at least the label given by Drs. Anderson and Ray, are perhaps one of the best examples – Just under half of the CC population comprises the more educated, leading-edge thinkers. This includes many writers, artists, musicians, psychotherapists, alternative health care providers and other professionals. They combine a serious focus on their spirituality with a strong passion for social activism. Sound familiar?

We often think the common sense ought to win out, right? Are there common sense answers to ufologists’ questions? Too often that common sense is skewed by all kinds of confusion and disinformation, let alone the chaos in our heads. What do we do? We make sense common based on practical and pragmatic assertions, such as the above – Such perfection may not be universal in the material sense, unlimited in intellectual grasp, or final in spiritual experience, but it is final and complete in all finite aspects of divinity of will, perfection of personality motivation, and God-consciousness. Attention, intention and action are the ultimate theme in advancing consciousness in humanity, in ourselves, and across the cosmos.

If any of this resonated, please take a moment and share this post somewhere. Thanks in advance.