I was pleasantly surprised to see that Jason was gracious enough to include my book. I think he 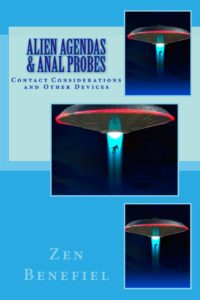 missed the main point, though. The science behind the ‘probe’ is stated fairly simply and succinctly, probably too simply for peering eyes to grok. Moments after having the experience I was reflecting on why it happens.

The first thing that popped into my head was not some New Age influence speculation. I’m a math and science buff, intelligent and investigative beyond most. Math and science are so present in the constructs of the universe, beginning with the foundation of sound and light condensing, or lower the vibratory rate, into form.

Advanced races that can travel across time and space are familiar with the natural laws and order of the universe, so they are well aware of the effects of adjusting frequencies. If you consider the known quantities of information about the nature of frequencies and the subtle adjustments that produce amazing changes in our bodies and environment, it just makes sense that the same adjustments can be made with technology applied to our bodies.

What happens when the vibratory rate is adjusted by such measures? Usually an orgasm is the first thing. That’s why the mistaken idea of sexual experimentation comes, no pun intended. We are so oppressed in regard to considering or discussion anything of a sexual nature that folks haven’t been able to transcend their paradigms. In time, we will.

So, thanks Jason, I appreciate the opportunity to address the subject again.

Luba, now my wife, was reading one of my books just moments ago on this Sunday morning, coffee in hand, when she burst forth through tarmac toward the sun again. Okay, couldn’t help the Moody reference. Alien Agendas and Anal Probes is what she was reading, then announcing with every ounce of surety in her that she was shaken to the core and this was exactly what she had been looking for… in Tom Campbell, in Kundalini, all the books and videos, everything… that this was the core of our existence – why we are here and what we are doing.

Farbeit for me to resist the opportunity to share her excitement, and my amazement at her discovery and how much it meant to her as a keystone experience. She thought everyone needs to read this and see/feel for themselves how much sense it makes.

And so the excerpt: