The following years (1989-92) led me further within to find a foundation to restructure my life after divorce and corporate expulsion. It brought even more weird stuff. I started several ‘New Age’ and UFO discussion groups, produced and hosted a television show and was interacting with various extraterrestrial and multidimensional life forms on a semi-regular basis. The education was immeasurable in value and wisdom. I really wanted to strive for significance.

I had earned a living during those years as a coach, consultant, educator, event coordinator, facilitator, machinist, production manager, musician, sales manager and theater technician to name some of the opportunities. In spite of the often bizarre and seemingly incredulous experiences, I kept my feet firmly on the ground. I felt like I had to in order to be credible in any other realms. I’d see hints of possible deeper conversations, but kept them to a minimum in professional environments.

I was responsible for $7 million a month in commercial aircraft spare parts just prior to my divorce in 1988 and a couple decades later I was facilitating multi-million dollar productions in construction projects and special events. I loved standing in the middle of chaos and creating order. I always wondered if I happened to share anything of a high strangeness nature that I wouldn’t be taken seriously even though I’d proven my professionalism over and over again.

Lives were also touched by the discussions I invariably initiated nearly everywhere I went. I walked away from dysfunctional environments many times rather than suffer my integrity for money or prestige. I was constantly torn between earning a living and feeling the pressure to perform in environments that put profit above people. I was plagued with the question still, ‘Who is Zendor?’

Thrust Out Into the Open

In 2000 I was serendipitously invited to an ET and UFO experiencer-centered gathering where the awareness of my connection with a group of ETs was publicly validated I front of a couple hundred people. The inner experience I’d been having for decades was suddenly an outer reality with witnesses. I felt empty and full simultaneously. There was a whirl of activity over the next few months, but the flow had some bottlenecks and I went back to work as a high school teacher.

I earned an MBA in project management, an MA in Organizational Management and was a certified hypnotherapist and transformational life coach as well. I have clients across many fields and industries now and the common thread throughout successful lives is authentic relationships and vulnerability. By that I mean that disclosure happens, the scary stuff that folks raise eyebrows over as they stealthily withdraw in most cases.

Beneath the obvious question is a quagmire of experiences that have either kept one at the brink of discovery and frustrated because of no results or so critical in their examination of the individual that there is little, if any, room for insightful innovations to enter the mind – let alone the heart. I’m hoping that knowing a bit about this one’s life experience and transformation helps to set the stage for deeper listening and a willingness to engage the processes that will follow shortly.

Over a decade ago some words came out of my mouth quite ‘accidentally’ during a conversation about clarity and observation.  They were, “A point of perspection dances in the balance of the seer’s vision.” The soulful expression came from a desire to integrate inner and outer views, introspection and perception, into a congruent framework that allows one to bridge the spiritual and material worlds. Why? I sought truth… that which is beyond argument yet prompts deeper conversation.

I was adopted very young by some wonderful people. Suffice it to say I lacked for nothing in my childhood and, as it turned out, I was born with a gifted intelligence. Evidently it intimidated my parents enough that they felt it important to keep their knowledge of it from me because they thought I might become too full of myself.

Well, I was pretty humble even with the natural academic and athletic ability I had back then. Even as an extrovert with a gregarious personality I was very insecure inside. I excelled in anything I did, with little effort, but I still had a gap in my heart I didn’t understand and yearned to have it filled.

I think this is where the challenge to find myself began, from the deep sense of knowing there was more; beyond the adoption, beyond the early visitations from those who felt like true family, beyond the feelings, sensations and voices others apparently did not experience even though initially I thought everyone did.

I totally understand now because that kind of experience was quite rare and virtually no one had a direct experience to which they could relate. I get that. It wasn’t until 35 years after my ‘White Light’ experience that I was asked to speak at an annual conference for the International Association for Near Death Studies. Some things just take time to get accepted, let alone explored to any degree beyond clinical.

Today, many Boomers and others are seeking to have such experiences of unity with the Divine after 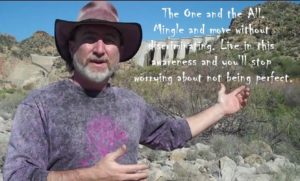 spending a lifetime of chasing the almighty buck and raising a family, then as empty-nesters realizing there is more to fulfillment. Money can’t buy love, but it sure seems to rent it for a while. It is short-lived at best and our world needs conscience with consciousness now.

Alas, my teenage exuberance in sharing my story was the beginning of what the field of psychology and more specifically psychiatry calls the ‘messianic complex.’ I felt like I had all the answers and needed to share them with the world. There was no ‘how to’ included in the experience, no ‘preparation’ involved in meeting the demands. So that became my question, “How?”

All the mental chatter does absolutely no good when the message reverts back to, ‘BE still and know that I Am.’ We engage the ‘do and have’ in life without the core of ‘being’ that ignites the union of spirit and matter; religion – reunion with God, but it often gets subverted to religious nuances that engage fear-based beliefs instead. We get caught up in the chatter, misguided organizational leadership and think ourselves separate. Self-realization then brings us into unity.

Early on, my world seemed a most unhealthy and unappreciated place to be for the aspirant of divine guidance who wishes to remain free of attachments. I could only express from a child-like place at the time because I had little life experience. As I got older I returned to that child-like place as it provided a happier daily living experience and far less attachment to outcomes.