Living in the Fringe

There are many stories about implants, their possible purpose and even those who’ve had them removed for study. I hesitate to make any assumptions at this point, although I do have my own story about etheric implants. Regardless, we are so young in the awareness of them or their purpose that to state a definitive position is folly, in my humble opinion.

Even relating this, I have trepidation as to how it might be taken. On May 8th of 2010 I woke up in the middle of the night on my stomach. I move around a lot so I wake up in all kinds of positions. I was immediately aware of that familiar buzz in the air (in my head) when my handlers show up; those guys who come visit.

I was awakened rather abruptly. I was aware of them and, in my mind, yelled out in joy to greet them. “Hey guys, where have you been? I’m so glad you came. It’s been way too long.”

I quickly moved on to inquire of the reason for their appearance. It was time for another ‘upgrade’ is

how they put it and they communicated that I’d feel some strange sensations for a bit. As soon as I heard that, there was a high-pitched instrument right at the bump of my skull in the back of my head, right between the cerebellum and occipital lobe.

It felt pretty weird and at the same time the frequency resonated in my cranial cavity like a Tibetan bowl, more with the sound of a dentist drill only pure, if that makes any sense. The process lasted only a few moments, the frequencies fluctuating slightly. They were distinct but with several pitches.

While they were there, I felt like I was super energized and, instead of speaking with my mind in words, it became apparent that I was producing some frequencies of my own. I’m not sure how to explain it any better at this time.

There are hyper-sensitive regions of consciousness, like the sound current heard by the Hindus. In those places we seem to communicate through vibration and subtle energy movement, rapid visual accompanied be various frequencies.

When they told me I was getting an upgrade, it occurred to me that getting hooked up to the cosmic computer (ASHTAR, as Dan Winter had told me) would be awesome. I’m not sure what it would do for my social life, though. The connection would be helpful for guidance and strategic planning if this new world order thing was going to happen any time soon, or even in my lifetime for that matter.

I wonder if there is ever anyone else watching as I go through these experiences. If they are, I’m hopeful they will be more forthcoming soon. It sure would be nice to have conversation.

To say the awareness of data exchange in that experience was intense is engaging understatement. My mind was engaged beyond anything I’d experienced to date, catching only glimpses of images as I watched the flow and felt the sensations of whatever it was they were doing. 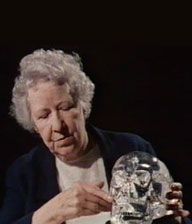 It was similar to the stream of images I saw on the morning of 9-11, only extremely fast. I wanted to keep up and at one point I wished they’d just hit me with a flash of light like they did with Dr. O’Leary and Anna Mitchell-Hedges’ crystal skull so many years ago. Maybe I was better prepared this time.

What I didn’t know was how long it would take to download and what, if any, experience would precipitate the data release into my waking consciousness. I’ve had flashes of visions packed with information and then had sensations of familiarity with them later on during an unusual event.

Having the imagery flash past me was no better than getting the pulse of light and it was frustrating to try and just watch without wanting to grab hold of something as it passed by.

What I caught were glimpses of  the transformation of Earth and relationships with human beings, from the war-torn and barren landscapes to thriving vibrant communities. There was no sign of ‘aliens’ and yet there was a sense of consciousness that I’ve only experienced in altered states while in the company of what I’d rather call ‘intraterrestrials.’

I refer to them in that way because of their existence ‘inside’ more so than in the outer physical world yet apparently able to interact with it. It is a quantum entanglement thing with other planes of consciousness.

I’ve been in awe of the capacity for communication and locomotion that they have demonstrated over the years. Their understanding of vibration, space-time and universal order far surpasses our cursory knowledge of quantum mechanics.

To even grapple with a label or title seems insignificant to them, yet there is always an undeniable sense of family and levels of leadership. I’m challenged by those who do need names; angels or ETs or cosmic beings that interact often with those who ‘channel’ more than anything else.

I guess that is necessary for the people who choose to open their consciousness to others, but I never real saw the need it that except, of course, when Jesus showed up that day at Woods Canyon Lake. I still wonder if that was a projection of consciousness that was for my benefit and the other witnesses.

That sense of family is harder than heck to get across to the folks who say that the ‘Galactic Federation’ is going to have direct intervention in the affairs of the planet and remove the dark cabal in the process. They just don’t do that. It is up to us, according to them, to clean up our own act. They are available as observers and consultants, if you will.

When they finished I couldn’t even consider falling off to sleep. I woke Jill and told her what happened, hoping for some of the bleed-over into her dreamtime that sometimes occurs or at least being able to talk about it for a bit. Not this time. She was barely able to wake up and listen, so I opted to get up for a bit and write about it.

Thoughts were still flooding my head, trying to interpret what had just happened and why. My mind was spinning from the reality check I just got. How in the world would that even sound believable if I were able to explain it? It would be so nice just to have a ‘cloud’ copy and download to everyone that was curious or interested in data mining. Yeah, maybe that IS possible!

I went back to the Mothership Café website with the notion that maybe the threads, or at least one or two, might already be in what I had so eagerly compiled over the last couple of years. There were so many potential trains of thought in converting the imagery into some displayable pattern or structure.

As I went through the website a pattern of sublime intentions emerged; supportive of harmony among people and planet, only from fringe experience relating applied sciences. This was truly a Mothership of data; links to people, places and things of similar intent yet only scratching the surface of possibility.\

A month later I stepped into the role of Organizer for a local Meetup that had been started by a friend a few years before, the Phoenix UFO Group. We met in the community room of a fire station in downtown Mesa, Arizona. The previous Organizer was wanting to keep the group going, but didn’t have the time to devote to it now. I felt it was time, but didn’t think about the previous May’s event having to do anything with it at all.

From my perspective, it seemed that the activities I’d left behind nearly a decade earlier where growing again in popularity. Heck, I’d started a ‘New Age’ discussion group in the late 80s that started with 13 people and grew to over 100 that attended presentations from folks I’d met and/or were requested by group members.

I had to be careful not to make the group direction seem too one-sided, but I knew there was a need for going deeper into consciousness, the experience of extraterrestrials and UFOlogy in a little different way. It had to do with consciousness, not the physical phenomena or reported experiences that had been garnering the attention of most groups. We did grow the group from 150 to nearly 250 over the next couple of years.

While we continued to have meetings with well-known UFOlogists as well as lesser known contactees, there was an interest in participating in the International UFO Congress that had moved to Arizona. I invited a few to participate and rent a vendor table. It took a little convincing and by the time of the event we had a half-dozen people who wanted to help out, two others ‘rented’ the table with me.

It was our first event and we hoped the exposure would draw more members. I also thought it would give me the opportunity to get to know a few folks that had been in the field for some time and I’d only had brief conversations. The event was interesting, but it seemed the topics and speakers were saying the same things I’d heard for the last 20 years or so.

Something did happen that totally caught me off guard. I went in to listen to a speaker; I think it was Richard Dolan. I had a nice conversation with him about a year later after he spoke at a MUFON meeting. It surprised me that his first response regarding my life-long contact was that the government just has to be tracking me. So far, it hasn’t been apparent to me even in the slightest. Maybe they are. I hope so.

When I returned to the vendor area, one of our group, a gal with some psychic sensitivity, approached me with a really strange look in her eyes. She said she’d been ‘asking’ about me, peering into the unknown to see if there was any validation to my story.

She said she was ‘shown’ a diamond-shaped image with two smaller ones above and below it… in the back of my head. She was ‘told’ I was plugged in directly to the cosmic computer. I hadn’t said anything about the visit in May to anyone. How would you respond to that kind of witness from out of the blue?

If I am plugged in to the cosmic computer, ASHTAR as Dan Winter had said the acronym meant back in 2000 during a private conversation, then what is the purpose? How is it supposed to work? Experimentation and inquiry seem to be the only way to find out. Man, this life sure has its moments.