I was in the hospital for a short time. My parents were concerned for my well-being (with reason) and the opportunity to commit me was created. One thing happened during my stay that was most notable for the record. Mom only came to visit me once during my entire stay at the Ball Memorial hotel. Dad told me later that she was too emotional over my institutionalization that she couldn’t bring herself to come see her ‘sick’ son. Well, one night she did show up unannounced.

About a half an hour before she got there, my tongue swelled up and my right foot became curled in like I had a clubfoot. It wasn’t a muscle cramp because it didn’t hurt. My tongue was so swollen that I could barely speak and my words came out so thick they practically drooled off my lips, but even without the drool they were nearly inaudible.

So Mom shows up a little later and I’m in that condition still. I was so embarrassed because I had absolutely no physical side-effects whatsoever, except weight gain, before this night. The new side-effects had started just before she came to visit, about the time she would have started her journey from home. It must have been horrible for her to see me that way.

I was not thinking that deeply at all at the time, only that I was sorry she had to see me in that condition. I could tell by the look in her eyes that she was just devastated by seeing me like that. As a parent and grandparent now, I can empathize even more. I would wish this on anyone.

She sat with me a while and told me some news about family things, so I didn’t have to try to talk a lot. I hurt so bad inside then. She soon needed to leave so I escorted her down the hall to the door as best I could. I went to bed shortly afterward and woke up the next morning with no more side-effects; my tongue was fine and my foot was normal again. “Weird,” I thought, but didn’t take it any further.

Now I had been sensitive to feelings as a child, but picking up on Mom’s energy and manifesting a ‘sick’ son for her to witness was a new trick. There was no medical reason for my side effects. It happened during a very traumatic emotional period, my mother having to face her fear in the moment, and a wide-open empath could very easily manifest that strong of a projection, especially with the emotional cording already in place. I had to consider the obvious.

A week or so later I was up late one night, sitting at the table in the common area when a large vivacious 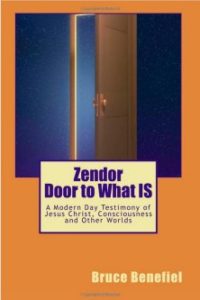 Black woman came up and asked if she could join me at the table. I welcomed her and she sat down to my left and opened a rather nondescript looking book, bound in brown leather.

I was reading a Bible at the time as well. There wasn’t much other material to read that was of interest. I found some solace in reading from it by spontaneously opening the book and just letting my eyes drift to a passage. I’d start there and read for a bit.

After reading for a few minutes we began talking, sharing our reasons for being there. She had been talking to others about being a ‘white witch’ and soon found herself being submitted to psychological evaluation. I inquired about what a ‘white witch’ was; reminded of the album I used to contact Gary earlier that school year.

She told me about Wiccan beliefs in general and I’ll synopsize them here:

Now I remember being fascinated by the Wiccan beliefs. It was not one of the religions I had read about in my earlier quests, but it seemed to embody them all in a much cleaner philosophy.

I told her what had happened to me, starting with the white light and including being taken to court for a competency hearing. She took a very deep breath, paused in thought for a few moments and then asked if she could give me a blessing. Absolutely! I was up for any assistance in my predicament.

She excused herself for a minute, got up and went to her room. She returned with a small vial of oil, said a short prayer, moistened her fingertip with the oil and made a cross on my forehead, leaving a trace of the oil.

I had a similar blessing from the Rev. Dr. Charles Brown (spiritual guide for Understanding Principles for Better Living Church – founded by Della Reese) a couple of decades later. Look for more details in a future book in this series. You won’t want to miss it.

I truly felt ‘blessed’ by her genuine intention for my well-being and her acceptance of my ‘story.’ The next morning was my weekly appointment with the hospital psychiatrist. I had continued a similar theme throughout, hoping someday he would actually listen.

The next day I shifted from the old storyline. I began telling Dr. Yarling what he wanted to hear, evidently. I admitted to everything he suspected, somehow, and must’ve been very convincing regarding my shift in mindset. A few days later I was told they were going to begin reducing my dosage and I would be out in three weeks. My favorite nurse, Betty (a cute petite black woman), told me Yarling had said something about a ‘miracle’ cure… I’d come out of my psychosis.

Did I have any ‘success’ in my treatment? I really didn’t feel any different about my personal experiences, other than pretty stupid for not talking to my parents about the drums and my financial condition. I felt like I’d just lied to the psychiatrist in order for him to deem me ‘sane,’ even though it solved the problem. My real questions were still about my experiences I knew I was just one person, Bruce, and Billy Shears was a totally fabricated ploy for attention… worked.

All of a sudden, after prostrating myself in total submission, I had a ‘miracle’ cure (he’d told my parents he wasn’t sure I would ever come out of ‘it’) and I was released a few weeks later, still on some massive doses of Thorazine and 50 pounds heavier. I felt and looked swollen, my body image was gross at that point.

I was a bit emaciated when I went in (125 lbs.), but the 175 pounds I carried when I left was 35 pounds over my normal weight and it looked like all water. I didn’t even look like me I was so puffy. It came off in time thank God. Now I’m back up to that weight, but I look like it fits as I’ve gotten older. I’d like to lose some.

The result of all of this was my self-esteem was temporarily absent, no confidence at all and it would be some time before I felt ‘comfortable’ as me again. I got severely anxious for quite a while. When I spoke to people I would shake on the inside so bad that sometimes my body would physically shake.

It took me some time to recognize that I could control the fear of rejection, even though I just wanted to be accepted and heard as being authentic and real. I thought ‘quivering’ was in fear of rejection or misunderstanding I guess. I learned later that it might not have been my own feelings I was responding to – others had similar sensations when being confronted with experiences beyond their direct knowing.

I suppose it could have been because of the withdrawal from the Thorazine, too.  Over time, through years of focused work and serendipitous opportunity, I gradually rose back into the person I knew before the brief hospital visit, or at least someone recognizable as a shadow of my former self. I liked that person a lot and so did everyone else. I hoped I could ascend from my first trials and tribulations.