Now I’m going to stretch you a little more with some probing questions. This is the core of the title of this book. I’m sharing an experience that continues to cause a rift in the Ufology crowd and even contactees have resisted it. This seminal view presents a new understanding that confronts many previously held beliefs within the field. So be it.

In bed one night a couple of years later I became aware of a lucid dream, or so I thought it was, until physical sensations bridged worlds. I woke up laughing on a table, like stainless steel, with several Zeta-looking individuals (Arcturians and Verdants are also of the same look) at the end of the table, having stepped back as I awoke.

How I awoke was interesting… laughing and joking with them as I began pulling electrodes the size of acupuncture needles out of my sphincter. I had a shirt on and was unclothed otherwise. I normally sleep nude, so the shirt was uncommon but it was there nevertheless. I still wonder why. I’m certainly not shy, but the vulnerability of nakedness is there.

I said something like, “C’mon guys, what are you doing?!?!,” as I began pulling the electrodes out one by 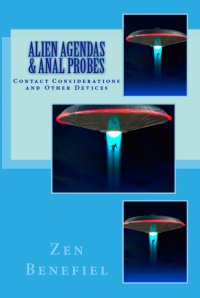 one. It seemed they were pinned up against the wall pushed there from the uncontrollable laughter I presented instead of the normal fear that could be managed by their minds. These kinds of events often cause people to become frightened and frantic, a fight or flight scenario.

As they watched me continue pulling the electrodes out, I was having no sensation until I got to the very end. I felt like I’d pulled out a pubic hair as I pulled the last one out. You know those things sting…lol. (Sorry for getting so graphic) At any rate, I instantly awoke in my bed as a result.

How did that happen? What it just a dream? How could I be in one place and instantly be in another yet feel like both of them are equally real? WTF?

I was baffled at how I could be there one moment and instantly return to my bed. I hadn’t really understood non-linear time yet or non-local events, let alone the aspect of multiple dimensions, even though I’d experienced moments of them throughout my life.

When I first opened my eyes in bed I instantly knew I’d had an opportunity few get. “Shit,” I thought, “I screwed up. I want to go back.” I wanted to go back with all my intention and power to do. Yet, I had no idea how. I had a chance for a conversation and I missed it! So…

I closed my eyes again, hoping to find a way back to the table, or at least the same room. As I let go of physical boundaries I began to feel like I was moving slightly, but I didn’t know where. It was an odd feeling, almost like that moment just before an out-of-body experience happens.

As I let go and embraced the sensation, instantly I found myself talking to a rather androgynous looking humanoid figure that appeared to be in a shimmering black/white robe of some kind, he rather glowed in the darkness.

I didn’t notice any particular surroundings. This one says to me in a soothing male voice, “Next time, just relax. We were only trying to make it easier to communicate.” Now THAT I didn’t expect.

My immediate thoughts went to a recent library scene. My partner and I had been doing some research on the perineum nerve. She was training as a message therapist and needed to do the research for her anatomy class. I loved spending time with her.

To make a long story short, the perineum nerve is a direct-connect to the central nervous system through the anus. This explains why some suppositories are so much more effective than oral medications in the medical field. How it applied here was similar as I found out moments later.

I have to admit, I’m still not sure of the term ‘extraterrestrial’ in the sense of off-planet sentient beings. These were definitely off-planet, but the sense of other-dimensional was uncanny. I think they are indeed multidimensional and we just haven’t got a clue what that really means yet.

So if you were part of an advanced society capable of light-speed or space/time travel, as indicated by the Tesseract model perhaps, and had technology to bridge worlds, how might you do it?

If humans, as a bi-pedal life form with nervous systems that have specific points of potential integration, could be ‘hooked up’ to help them increase their vibratory rate it would make sense that it be done through the sphincter. Wouldn’t it? I mean, it is the obvious place.